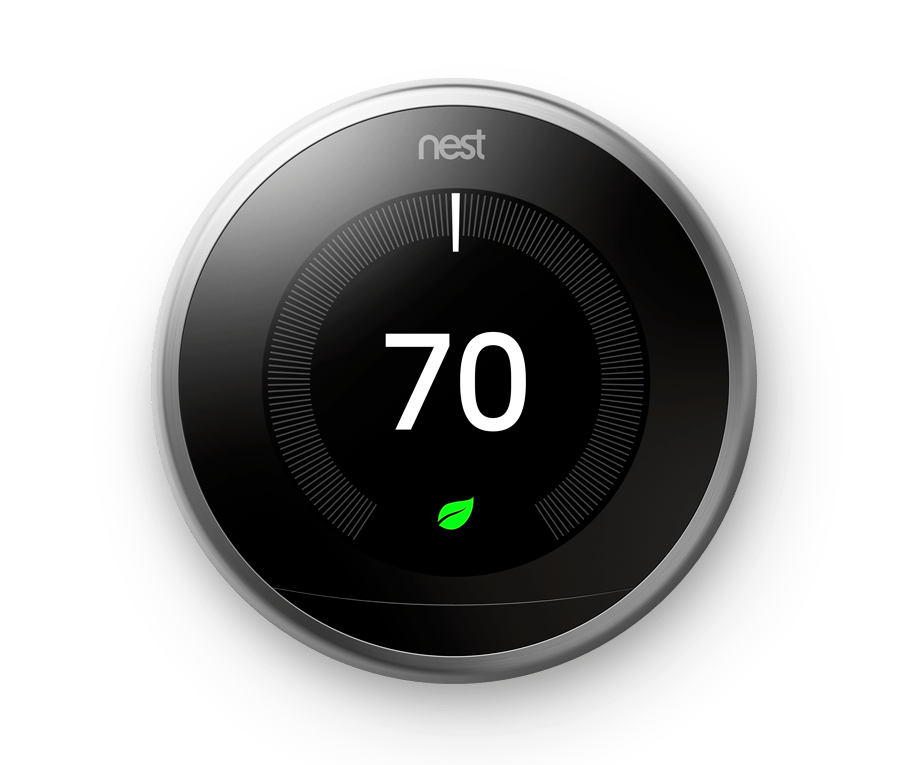 In October of 2016, my wife and I moved into our brand new house. We had the house built by Pulte Homes and after the ups and downs of home construction and selling our townhouse we were ready to move in and be done with the process.

Previously in our old townhouse I wanted to put in a Nest Thermostat, but right before they came out I bought a Honeywell unit that had similar capabilities and it was hard to justify spending another $200-300 at the time on a thermostat when I just bought one. Surprisingly, there wasn’t an option by Pulte to have them install a Nest thermostat or any “smart” thermostat when building the house. At the time they were advertising that their houses had top marks in Energy Efficiency and Green features. But the thermostat they installed was just a basic programable thermostat. By the end of the first week in the new house I bought a 3rd Generation Nest Learning Thermostat and installed it. 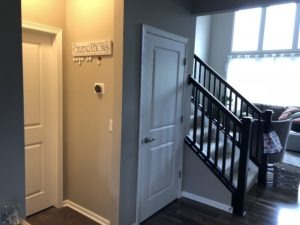 Overall the Nest Thermostat worked as advertised. It learned our routines and in the winter and summer months it adjusted the temperatures automatically. With the rapid temperature swings of Minnesota sometimes we have to do some manual tweaking when the seasons change in a one week time frame.

Even with all the intelligence that is built into the Nest thermostat It can only work with what it’s got. In my case I have a 2 story house with only a single zone, so the standard home heating and cooling issues still apply. In my case the second level of the house gets really hot at night during the summer and the main level and basement is at the temperature that is set on the thermostat.

Then fast forward a year-ish. I heard the announcement of the Nest Temperature Sensor and this week it was released. So I went down to Best Buy to pick one up. Now lets get the technical requirements out of the way.

The Nest Temperature Sensor comes can be bought as a 3 pack or individually. The 3 pack is $100 and the individual pack is $40. The Nest sensor only works on the 3rd Generation Nest Learning Thermostat or the Nest Thermostat E. Also the you can there is a limit of 6 sensors per thermostat and/or 18 sensors per house (3 zones with 3 thermostats with 6 sensors each). With that being said my first gut reaction was to by a 3 pack. But then when I started looking at it and how they worked. In my case I found spots in the house where it would be nice to monitor the temperature but, since I only have a single zone in my house, and 2 out of 3 of those sensors would be in a the same level of the house. In turn any automation based on temperature would have the same cause and effect. So as a starting point I just bought one sensor and placed it in the bedroom. 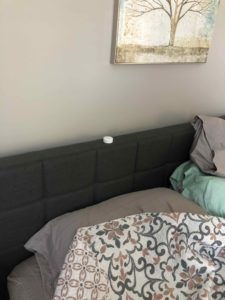 Nest warns you about placement of the sensors. The short version is don’t place the sensor in direct sunlight, behind furniture etc. Basically you have to find the spot in the room that will give you an accurate temperature reading without being a place that traps heat or cooling to trigger a false positive. The sensor itself is tiny so if it’s out in the open it’s not really an eye sore.

The Nest Temperature sensor comes with a 2 year battery similar to a watch battery. When you install the sensor you first scan a code that is on a tag then put out the tag to power on the sensor. When I was reading reviews I did see a warning about the 3 pack. Don’t pull those tags all at the same time. There isn’t any indicator light or any way to tell the devices apart. So if you by a three pack set them up 1 at a time to keep the individual sensors straight.

The install is super simple. 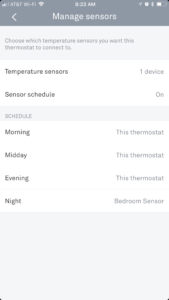 Holding the schedule will give you the time range that each option runs at. In my case I selected night which is 9PM – 7am.

When everything is said and done it will show up on the main screen of the thermostat. You can switch between the sensors at will at any time. The white dot shows which sensor the thermostat is using to control the temperature in the house. 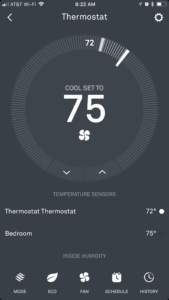 After the first 2 nights of using the sensor to I have not woken up dying of heat in the middle of the night. I will update this point in a month to let you guys nows how it goes.